The above web version is experimental! Chrome (on desktop) is recommended, though there are occasional audio issues and it can be a little laggy. Firefox has serious audio & lag issues in my experience and should be avoided. The game loads on mobile Chrome but seems to crash after a short time. I haven't tested other browsers. The downloadable version at the bottom of the page should run more smoothly!

All of the stories are fiction, but everything written is the truth.

If you wish, you can read content warnings for the game either as a brief summary (less spoilers) or including a detailed chapter-by-chapter breakdown (more spoilers).

It has 10 chapters, and a little over 20,000 words of narration and dialogue. It is probably around 1 to 2 hours long, depending on how quickly you read. (If you use "auto mode", which advances text automatically at a relaxed pace, it is about 2 hours and 15 minutes long.)

This is a picture of it: 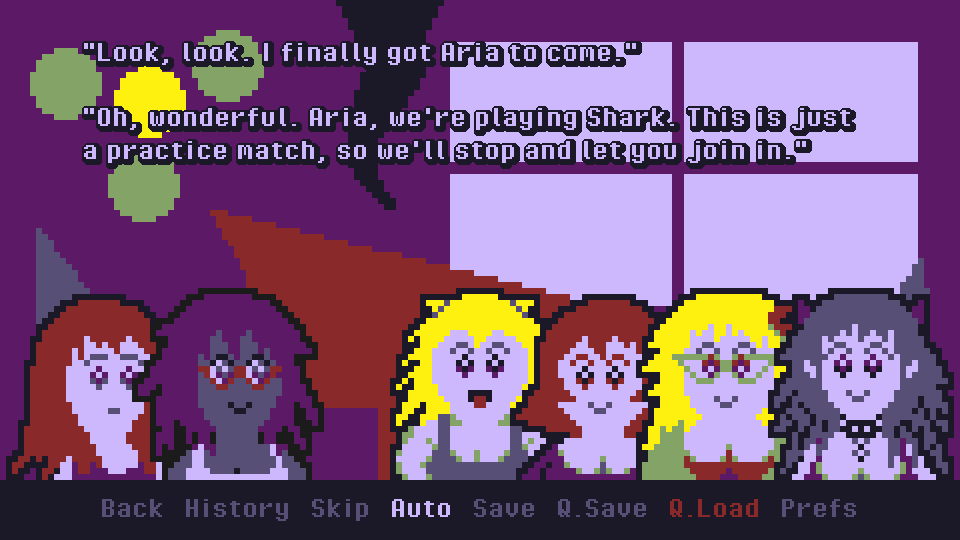 It's a strange story, but a few people in this world might be able to relate to it.

Since this game was made under unusual circumstances, I want to talk about the development process here.

The jam provided the following 10 themes for each day:

You can see from the Chapter Select menu in the game that I stuck to these pretty closely, but with a bit of rearrangement of the order towards the end, and a different final theme (though it was inspired by the original #10).

The jam also provided the following optional colour palette, which I used. So if you're wondering why it "looks like that", there's your answer.

So, did I finish in 10 days? No. I realized on Day 1 that doing one complete chapter per day was not feasible for me. So I lowered my goal to one "text script" for a chapter per day. I actually reached this goal; I wrote the whole first draft of the story in 10 days. But despite a big push during the last few days, I'd only finished the visuals for 7 of the chapters, and I had barely made any progress on aspects like music, sounds, and menus.

So, on December 10, I decided to take a break, and take a second 10-day period, December 15 to December 24, to finish the game for a Christmas release.

However, on the 17th, I found out it was the VMJ organizer's birthday on the 19th. The game was getting pretty close to done, so I decided to try to finish it for the 19th. So that's why it took 10+5 days to create.

By the way, the game was made in RenPy, which I had never used before, so I had to learn it while making the game. It is pretty nice and easy to use, but customizing the fine details can be tricky. If you don't like mixed-size pixels, I'm sorry.

The story, characters, sprites, and backgrounds were created by me.

The font, the music and the sounds are mostly from royalty free or public domain sources. A list of sources can be found in the "credits.txt" file in the "game" directory of the download. The list is also available here: http://aria.garden/credits/dgn.html

There are many people I'm thankful for, who helped shape this game in various ways, whether they intended to or not. But I already thanked them in the end credits of the game, where it's more thematically resonant, so I won't thank them again here.

The web version at the top of the page seems to work okay on Chrome, but it has some minor issues, so I recommend downloading the game if you have the energy to spare.

RenPy can build for Windows, Mac and Linux. One download is for Windows + Linux and should work on both operating systems, but I've only tested on Windows. The other is on Mac, and I haven't tested it at all.

That was a very cool story, I enjoyed every aspect of it :) The surreal dimensional travel bits were amazing and all characters were so cool! (I love Casey he's the best and I aspire to be him).

The pixel art was cute, and very appropriate! Also I laughed a lot during the kink scenes, very fun times!

I really enjoyed this. Heartwarming seeing your growth, and how you framed it in many creative settings and situations. Lots of laughs too! It also got me thinking about myself and my own story, and the ways in which it's different, by contrast. The music also heightened the experience, akin to glasses. Thanks for making this, I really got into it as it went on.

There's so much great VN language here; the timing on the graphical and music cues is ridiculously on-point. I was shocked afterward reading this was your first time using Ren'Py.  I started picking up the When They Cry influence in earnest during chapter 5 -- you absolutely nailed the comic timing of the clubhouse bits with both the writing and the VN direction.

The stories themselves are super-lovely. Each episode is cute and exciting on its own, and then the whole thing builds in a really nice way that totally caught me off-guard. The action and catharsis-y bits in the back half were really good and felt earned me.

This was stunning, thanks so much for making and sharing this. Stories like this that make me feel extremely rewarded for seeking out new-to-me devs on itch.

Hello! I'm attempting to play this in chrome but just after the title screen loads the screen goes black except for a message that says: "Error: Uncaught RangeError: Maximum call stack size exceeded (see JavaScript console for details)"   I know this game's been out for a while so if you don't have the time/energy to figure out what's going on that's fine, I can try on firefox and see if that works or download it or somthing, but I thought you should know. Your games are neat and so are you btw.

It seems like the newest update to Chrome broke Renpy web games somehow! Unfortunately, I think this game was built with the newest stable version of Renpy, so I don't know what I can do other than wait for the issue to be fixed by either the Chrome team or the Renpy team.

I recommend trying the downloadable version. Last time I tried the web version in Firefox, it didn't run very smoothly.

Thank you for reporting the issue and I'm glad you like me and my games :)

I updated the game to Renpy 7.5.1 and I think the issues with the web version on Chrome are finally fixed! Wow. 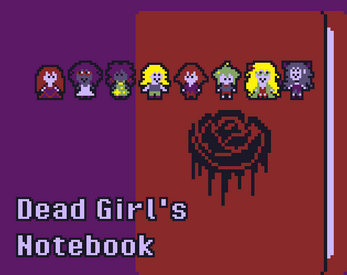